Panasonic India has launched the PanasonicT41 mobile in India and is currently being sold for prices starting from Rs.4470 at Amazon, which is the lowest price in India as on 05th August, 2020. Panasonic has been priced in the budget ( < 10k) segment. Some other mobiles that you can consider in this segment are Nokia 110, Nokia 2.1, Nokia 1, Spice Raagas.

Panasonic T41 runs on Android OS, v4.4.2 (KitKat) out of the box. Further OS version updates can be expected as per the developers convenience.

The phone is powered by Mediatek MT6582 chipset, which is a Quad core, 1.3 GHz, Cortex A7 processor and has Mali-400 MP2 GPU for your gaming needs. It has 512 MB of RAM and an Internal storage of 4 GB. The phone also supports external storage via MicroSD card up to 32 GB.

The phone flaunts a 4.5 inches, IPS LCD capacitive touchscreen display. The resolution of the display is 480 x 854 pixels which roughly translates into 218 PPI of Pixel Density. The display of Panasonic has good viewing angles and sunlight visibility is pretty decent The display of T41 Panasonic supports 16M colors.

The primary camera flaunts a 5 MP, 2592 x 1944 pixels, autofocus, LED flash shooter and we have a VGA secondary camera for your selfie needs. The T41 Panasonic has video recording capability that can do Yes.

Here is the list of prices and online stores Panasonic T41 is available at: 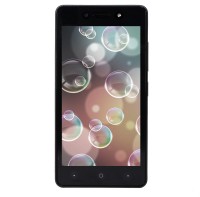